Leah McFly, aka LeahV, is an award-winning, Boston-based DJ/producer/event coordinator who has been working in nightlife for over ten years. Recently nominated a fifth time for a Boston Music Award (and a win in 2011/DJ Artist of the Year) , Leah is riding a wave of substantial and steady bookings to the top of the DJ game. After 16 years of learning the craft, she’s still out to perfect each set and give it her all at every party. 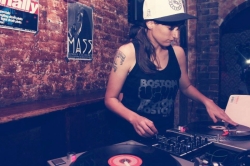 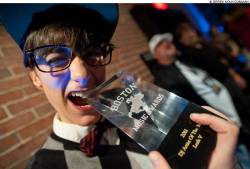 Her seamless, genre-bending sets, and innate ability to read just about any crowd have made her a staple in the Boston scene and a commodity on a national level, booking events and residencies in New York, Miami, San Francisco, DC, Philadelphia and beyond. Known as one of the city’s “bravest DJ’s”, she has managed to blur the lines between the sexes in an intensely male-dominated field, drawing the focus away from gender, and placing it solely on skill…as it should be. Leah answers the increasingly popular question, “why aren’t there more femaleDJs?” The response, for Leah, is always quite simple:

“The bar for DJ’s who are women is set so low, skill is almost a non-existent factor in booking gigs.”

Leah is teaching beginner DJ’s of all kinds, men, women, and children, to become proficient in the craft at The MMMMaven Project in Cambridge Massachusetts, helping to ensure that the next generation of selectors will preserve the foundation that DJing was built on. She hopes to be an inspiration to other women who want to be DJs, and to challenge her peers to be better, to become better herself, and to set that bar MUCH higher.

Follow L.McFly on her barrier-breaking journey to the top, and support awesome DJs (especially the ladies) everywhere!